The ILFORD ILFOCOLOR retro Flash Single Use Camera by ILFORD is a point and shoot disposable camera loaded with Ilfcolor Film. This camera takes 27 Photos, can be used indoor or outdoors, with an automatic flash recharge that covers 1.2 to 4.5 Metres.

Press release from the issuing company 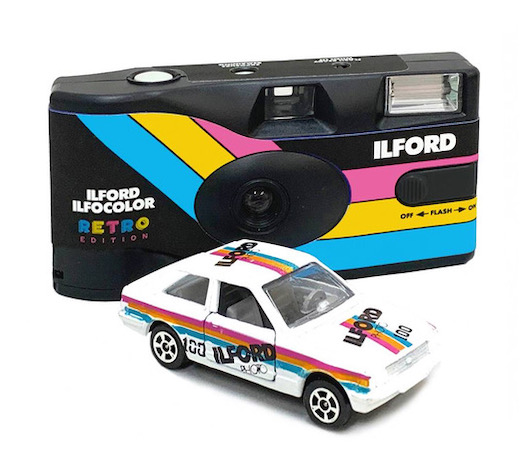 This comes hard on the heels of the success of the ILFORD Sprite 35-II compact reusable film camera, announced late last year. And as with the Sprite – which was originally released in the 1960s – the ILFOCOLOR Rapid pays homage to ILFORD’s past: while ILFORD is well known for its black & white film, it also sold a range of ILFOCOLOR colour negative film.

It’s a great way to trial the distinctive look and feel of film without breaking the budget.

Unlike many digital cameras, the single use film camera features an optical viewfinder – essential when shooting in bright sunlight. It’s equipped with a fixed-focus wide angle (31mm) f11 lens. Shutter speed is 1/125 sec. The camera delivers sharp images down to 1m. It’s pre-loaded with an AAA battery, with a 15-second recycle time for low light shooting and fill flash in bright daylight.

Education on the Subject of Sustainability
In both disposable camera production and packaging, sustainability is a particular concern for ILFORD. Since too few people still know that disposable cameras can be easily recycled, Ilford will educate through an ongoing campaign.